For the Love of Beer

Many of us enjoy a cold beer now and again. But if pressed, do you think you could name a handful of beers in a blind tasting?

Brian Dunn did better than that. So interested was he in beer, and the intricacies of beer flavours, he schooled himself as much as he could about his favourite beverage. And then wowed the crowd by identifying the vast majority of them at a special tasting.

“At the table we had these tiny tasters of 30 beers and we weren’t told what was what, so I tried to guess them,” recalls Dunn, founder of Canmore Brewing Company. “Back then in Alberta, there weren't so many beers that you probably couldn’t name them. But I think I named 25 of the 30 beers, and I thought, ‘wow, I’m drinking a lot of different beers and I'm starting to recognize them.”

Dunn’s innate ability to really taste and understand beer became somewhat of a parlour trick for friends and relatives, who would bring beer to Dunn’s home in a brown paper bag and get him to guess the country it came from, or the style.

Eventually, Dunn’s love for beer evolved from consumer, to producer.

“It started in my garage—like many breweries, I guess in the last few years. I worked as an engineer and an investment banker for about 25 years in Calgary in the oil and gas industry and in 2014 I left that and didn't know what I was going to do,” says Dunn. “So I took up my old hobby of home brewing again. Soon I thought that now might be the time to look at doing my own brewery because craft brewing was just taking off in Alberta.” 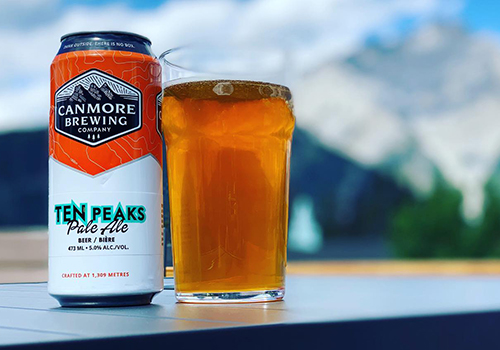 When asked about Canmore Brewing’s style and what he likes to make, Dunn again hearkens back to his younger days.

“Back then I liked to experiment with drinking different beer, mainly because I didn't want to drink what I thought was flavorless beer. I wanted to really taste something. I would actually go into the Co-op in our neighbourhood and I was mesmerized at their huge walk-in beer cooler. They were one of the first companies around town to who started early, to really start stocking a whole bunch of craft beer. I appreciated that, because I could get really interesting European and craft beers.”

Dunn recommends any newcomers to his brand start by trying his Ten Peaks Pale Ale.

“I call it our gateway beer and even on the can it says ‘welcome to craft beer’. It was meant to be a very innocent, easy drinking beer that is still craft. It's fresh, it's unfiltered and unpasteurized. It has a little bit of flavour. It's not overbearing in any form and it was really meant to push people out of their habit of drinking boring beers. If you think craft beer is all about super strong, hoppy IPAs and overbearing flavours, this is not like that. It’s a great introductory beer that can start to help develop your talent a little bit, and lets you acquire that palate.”

Will you be able to blind-identify 25 of 30 craft beers after sipping on the gateway Ten Peaks Pale Ale? Probably not. But when you are ready to experiment even more, you too can walk into Co-op’s massive beer cooler, and find the rest of Canmore Brewing’s lineup, as well as dozens of other great Alberta craft beers.

“When we get people calling saying, ‘where can I get your beer?’ we tell them to go right to Co-op!”