Plenty of people make home brewed beer, but how many build and engineer their own brewing equipment to get it just right, or solder their own circuit boards? That’s the kind of attention to detail you can expect from Jochen Fahr, owner and brewmaster of Turner Valley’s Fahr brewery.

“My set up then, it was a big engineering mess—kind of overbuilt,” laughs Fahr as he recalls his early days. 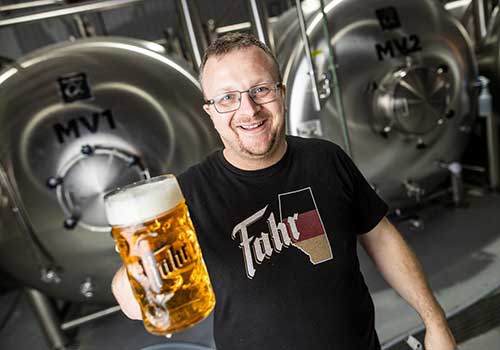 Fahr grew up in Germany and came to Canada at age 24 for an exchange during his undergraduate degree in biochemical engineering and says he’s had a lifelong obsession with yeast and fermentation.

“I was using microorganisms and I had to do an honors thesis in which I had to genetically transform yeast to produce a skin cream ingredient.”

After graduating in Germany in 2008, he returned to Canada to study biomedical engineering. During that time, he started home brewing and winning awards at home brewing competitions. That included one that came with the chance to have the home brew recipe he’d created brewed and bottled by a large B.C. brewery.

“Russell brewing brewed it and it was bottled in Champagne bottles,” Fahr recalls proudly. “I entered it as my wedding beer because it was the year I got married.”

With great beer and public success under his belt, Fahr started thinking he could open his own brewery. He started raising funds and in October 2017 he opened Fahr brewery in Turner Valley southwest of Calgary.

“The prices for leases were much less than in Calgary. Plus, I felt like in Turner Valley I could do more. I didn’t want to be just another Calgary brewery, I wanted to go to a place where we could be a bigger part of the community. Turner Valley also looks a bit like back home, which is nice.”

For folks new to the Fahr brand, Fahr himself recommends his Hefeweizen for folks who might be drawn to something like a Belgian Moon or Erdinger. 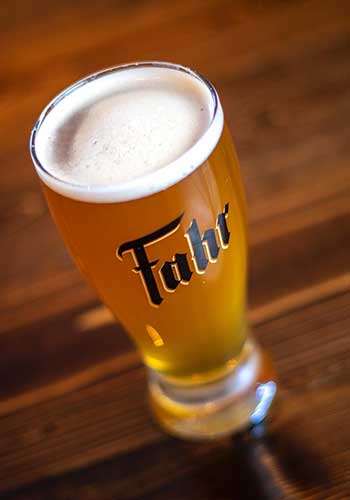 “If you’re more of a lager person or a pilsner person, our Pilsner is perfect for you. We also have a hopped-up version of our Hefeweizen called Hoppy Hefe.”

Fahr’s journey hasn’t been without its challenges. Initially available in bottles, the bottling line broke down earlier this year, “I believe the correct military term is FUBAR’ed,” laughs Fahr.

It was so completely beyond repair, Fahr had to think fast and find an alternative to get his beer to market.

“Serendipity had it that just a few kilometres away from the brewery in Black Diamond, one of the best millwrights around is located there and they had just finished a new prototype for a new kind of counter-pressure can filler. So a week after we had that bottling line breakdown we had a canning line secured. It was an incredible coincidence and overnight has allowed us to significantly increase our production.”