Alberta is Blessed with a Plethora of Fine Beverage Purveyors

We’ve got the rolling prairies, the towering Rockies and a reputation for being the friendliest province in the country. When you say ‘Alberta’ people also think of cowboy hats and delicious Alberta beef.

No surprise then that beef would figure prominently in pairings as we prepare to celebrate Canada’s 150th Anniversary. This month at Co-op we’re taking a tour of Canadian food and drink across all the provinces and territories.

While red wine is a natural with beef, there’s no grapes grown here. Nonetheless if you’re a purist, you can get a plethora of recommendations on wine from the experts at your closest Co-op Wine Spirits Beer location. Of course, make sure to select a Niagara or Okanagan vintage for your Canada 150th celebration!

Here in Alberta we’re blessed with a plethora of fine beverage purveyors. From beer to spirits, there are numerous craft breweries and distillers that make excellent products. If you haven’t tried any of their wares yet, let Canada’s 150th be your excuse.

"I typically don’t enjoy porters and stouts however this one is super tasty and so easy to drink year round. This would go great with some grilled red meat or any kind of chocolate dessert.” 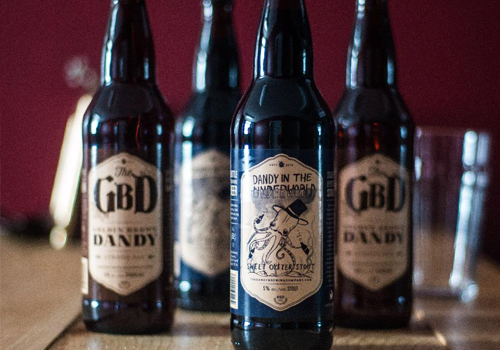 New on the block, Calgary’s Dandy Brewing is making some tasty new beers that are perfect for an afternoon around the barbecue. Dandy Brewing In the Underworld Oyster Stout is a great beer to sip on in the afternoon while noshing on some raw or barbecued oysters.

Une Vieille Maitresse from Dandy is another unique offering. With peppery notes in the beer, “we like it with sharper saltier cheeses like aged cheddar and manchego.”

It would also be perfect with beer corn, since the beer isn’t hoppy or malty. What’s beer corn, you ask? Open a bottle of beer, apply it to fresh Taber corn and grill. For the how-to, watch this.

Dandy’s GBD or Golden Brown Dandy is a perfect pairing for Alberta beef.

“With grilled meats it’s great,” enthuses Leon. ”The bitterness cuts thought the richness of the red meat and the char. It stands up really well to it and goes perfectly with a steak.”

Eau Claire Distillery makes a variety of handcrafted spirits including vodka and gin. Eau Claire Three Point Vodka is crisp and clean and can measure up to some of the world’s most popular vodkas. If you like to drink your vodka on the rocks or in a dry martini, you’ll be impressed with this one.

Eau Claire also makes Parlour Gin which has a lively, herby bright taste. The distillers serve it with something they like to call the ‘Hot Italian Goat’. Smear hot creamed goat cheese from Rock Ridge Farm in Ponoka, Alberta with high quality olive oil, herbs and black pepper and serve it on some grainy crackers. Fascinatingly Eau Claire makes their own crackers from the leftovers in the distilling process.

“After barley is mashed and the distillery has extracted the flavours and sugar for fermentation, the remaining grain is used for high protein animal feed or to make these delicious crackers!”

Celebrate Canada and Alberta by trying a new beer or local spirit this Canada Day.