The Vodka Everyone Can Agree On

There are two kinds of vodka people: the purists who seek out the finest, clearest, crispest, near-flavourless vodka for making the perfect chilled martini, and those who prefer their vodka with a bit more flavour. Think Pineapple or Whipped Cream vodka with coke, to smooth the sipping.

These two groups rarely mix: the crisp & clear crowd don’t like the sweetness and artificial taste that can come with flavoured vodkas, while the smooth sippers find plain vodka served solo to be too overpowering for more delicate palates.

It’s about time there was a third category, and now there is. 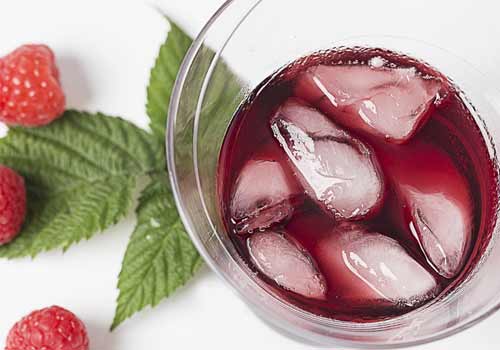 Real Fruit Flavour; Nothing Artificial
“These are flavoured vodkas, but the flavouring is all real fruit,” explains Mike Stanfield, owner of Starr Distilling and maker of the Summer Love line. “If you just smell it you’ll get that right away.”

Taking a Hobby to the Next Level
Stanfield made infused vodkas at home for years as a hobby, adding real fruit and spices to store bought vodka in Mason jars and letting it sit until the natural flavours permeate the spirit. Nowadays he has a professional distiller making him his own vodka, but he’s still sourcing some of western Canada’s best fruit from BC, and adding it to the mix to give the liquor truly realistic flavours.

“The fruit gets strained out, but all the taste and some of the colour remains,” says Stanfield, holding a bottle of ruby coloured Summer Love Raspberry vodka high in the air and catching some sunlight. “It gives the vodka a vibrant taste but one that’s really authentic.”

Stanfield says it takes about a pound of real fruit to produce a single bottle of his infused vodka.

With a family history of entrepreneurs, it’s probably no surprise Stanfield left a corporate job as a recruiter, looking to try something new. He seriously started looking at taking his hobby mainstream at the same time Alberta loosened liquor and distilling laws, making it easier to open a booze-focused business.

“Our friends used to tease me that I should open my own distillery instead of running this crazy flavour lab in the basement like I was doing. We laughed and thought it was funny, but then I ended up taking a course on distilling down in Seattle and then things got serious. I came home from that dangerously informed.”

“We started with infused Raspberry vodka, then we created the Spiced Pear,” remembers Stanfield. “It tastes just like fresh pears, but it also has a cinnamon-nutmeg kind of spiciness to it. It’s hugely popular during the holidays.”

Summer Love Peach vodka is also on the roster, bringing with it all the flavour, juiciness and softness of summer’s ripe peaches, but with no added sugar, and no artificial flavours.

How to Enjoy Summer Love Vodkas?
At an afternoon tasting, it’s easy to see the allure of this new vodka category; the flavours are bold, but not cloyingly fake like so many artificially flavoured vodkas. They’re truly full of taste, and can easily be sipped solo, but Stanfield also recommends them with a splash of soda.

Soon the ideas are flying; what about making a Summer Love Peach Manhattan where the peachy vodka replaces vermouth? How about trying a French 76 with the raspberry vodka, taking the place of plain and mingling with the traditional lemon juice and champagne? What might it be like to modify a Paper Plane by replacing the usual Aperol, Amaro and Bourbon combination with Aperol, Amaro and infused Summer Love Peach vodka? Wouldn’t it be great simply over crushed ice on a hot day?

It’s easy to see the appeal these gently flavoured vodkas could have on the cocktail circuit. 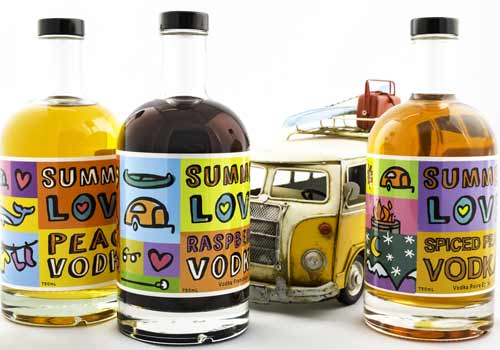 Spot the Bottles, thanks to Familiar Artwork Labels
Stanfield’s bottles will be easy to spot at your neighbourhood Co-op Wine, Spirits, Beer too; his distinctive pop art bottles are vibrantly colourful, and if they look familiar, it’s because well-known Calgary artist Dean Stanton designed them.

“If you drive down Crowchild Trail near Memorial Drive and you’ve ever seen the mural on the side of the Sunalta school; that’s Dean’s work,” raves Stanfield. “His work is iconic and beautiful.”

Summer Love vodkas are truly unique on the market today, and that’s why Stanfield is dedicated to his products: “There’s no one else doing flavoured vodkas this way. It’s about the natural flavour and the real aroma.”