Calgary Breweries Hold One Another in High Regard

and Treat Their Businesses as a Community.

Every city has its beloved breweries, and Calgary is undoubtedly no exception. From its storied history with breweries older than Alberta itself to the heydays of Big Rock and Wild Rose, to the microbrews that you haven’t heard of yet, the beer scene in Calgary has been strong throughout our history.

It all started last century when the Calgary Brewing and Malt Company opened in 1893 in Inglewood. It was founded by A.E. Cross, one of the “Big Four” who founded the Calgary Stampede. They used a picture of a buffalo head with a horseshoe around it for the label of their “Calgary Export Lager.”

It expanded quickly and began to buy hotels and other small breweries, so much so that the area surrounding it was renamed “Brewery Flats.”

The success of the brewery changed the agricultural landscape of Southern Alberta. The brewery imported most of its barley from Eastern Canada, distributed it to local farmers, and offered them 25% above the market price for the fully grown barley.

It was the first industry to use natural gas in western Canada and was among the first Alberta companies to provide insurance and pension plans for its employees.

The brewery was sold to Canadian Breweries in 1961 and was later taken over by Molson Breweries in 1989, ceasing production five years later. The brand has recently been resurrected in the city; keep reading to learn more. 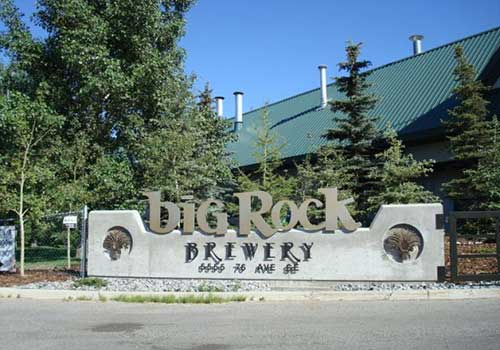 Big Rock Brewery
Big Rock Brewery is a household name in Calgary, known for its wide selection of beers. Big Rock was founded in 1984 by Ed McNally. McNally was a lawyer who represented barley farmers in a case with the Alberta Wheat Board in the 80s. He learned about Alberta barley from the court case and the nearby access to glacier-fresh water and started Big Rock, named after a glacial boulder near Okotoks.

Co-op Beer
Brewed locally by Big Rock Brewing, Co-op Wine Spirits Beer has its very own beer label! Co-op Beer is made to exacting specifications, while keeping an eye on the bottom line so that we can offer great beer at a great price. Look for our India Pale Ale, Premium Light, Premium Lager, Classic Red Ale and Co-op Pilsner.

Wild Rose Brewery
Wild Rose Brewery started in 1996 in the Foothills Industrial Park, initially selling only draft beers, before moving in 2006 to Currie Barracks, converting a 1936 quonset hut into a microbrewery. In 2019, shareholders voted in favour of selling the brewery to Sleeman, one of Canada’s largest brewers, a subsidiary of Sapporo Breweries Ltd.

The Microbreweries
In 2013, Alberta’s liquor laws changed, removing a minimum production capacity requirement, which had been a significant hurdle for those considering starting a brewery. The law previously required brewers to produce a minimum of 5,000 hectolitres (500,000 litres) of beer (2500 litres for winemakers) per year. That change allowed more small brewers to produce smaller quantaties of beer for sale and led to an abundance of microbreweries in the city.

Where to find local Calgary beers: at Co-op Wine Spirits Beer
With more microbreweries popping up all the time, it’s tricky to compile a complete list, but here’s a broad sample of some of the best breweries carried by Calgary Co-op Wine Spirits Beer. We love to support local businesses and local grain farmers, so that’s why we carry Calgary’s largest local beer selection in some of the biggest, coldest coolers anywhere! 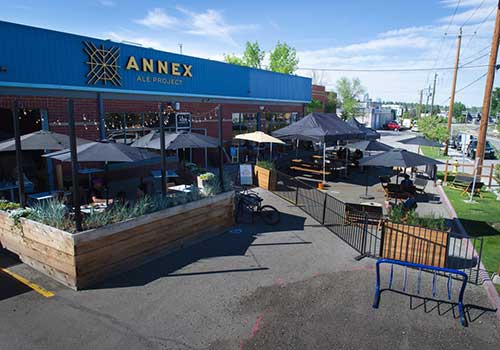 Eighty-Eight Brewing
The entire brand hearkens back to the golden age of Calgary when the Olympics came to the city. With retro stylings, but modern craft brewing processes, Eighty-Eight is making some of the best beers in the city.

New Level Brewing
New Level Brewing was conceived by the Ross Brothers while attending Maryland Deathfest, a heavy metal music festival. While the branding leans rather heavily towards the metal theme, the beer is both new and moder (think sours!) to traditional and tasty.

Fahr
Brauerei Fahr is the brainchild of Jochen Fahr, and he brings the high standards of his German homeland to his brewery, located in Turner Valley. You won’t find novelty or unique flavoured beers here. He promises only “beer-flavored” beer, using barley, hops, and water. They do serve a Radler in the summer, which is made with a German Limonade. 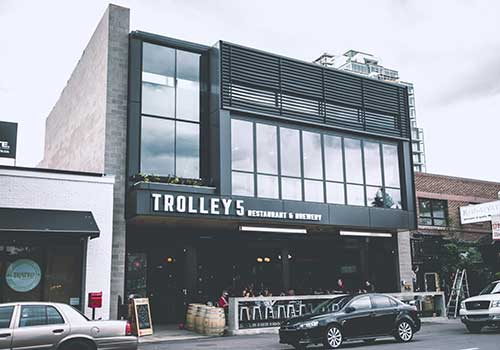 Trolley 5
Trolley 5 is named after the No.5 Trolley Line that once ran through the Beltline area, and this busy 17th Avenue microbrewer has made an array of brews that are a hit with locals. With offerings that range from lager to pal ale and radler, there’s a beer for every taste from Trolley 5.

Jasper Brewing Company
Jasper Brewing Company was founded in 2005 by three friends born and raised in Jasper, Alberta. They claim to be Canada’s first National Park-based brewery.  While the retro National Parks look will draw you in, giggling with nostalgia, the outstandingly crisp and refreshing beers will keep you coming back for more. A shout-out to their Crisp Pils; a rare beer than can make any beer drinker happy.

Long Hop Brewing Company
Long Hop Brewing Company is a Calgary-based brewery with Aussie roots. It’s named after a cricket ball delivery that makes for an easy shot for the batsman. Long Hop has been around since 2019 and its boldly labelled, easy drinking beers in tallboys are a hit with both expats and locals.

Cabin Brewing
Cabin Brewing is dedicated to making you feel like you’re visiting an old-school cabin. With all the warm fuzzies of DIY hangout spaces like a cardboard box fort, a cubby under the stairs, or a flashlight under the covers. Those childhood dreams converted to tents and sleeping under the stars, so Cabin is all about creating that home away from home feeling. But, you know, with beer.

Ol’ Beautiful
Ol’ Beautiful is located on 12 Street SE, in Inglewood, near Cold Garden. This understated brewery is the type of place that will slide into your DMs without you even realizing. 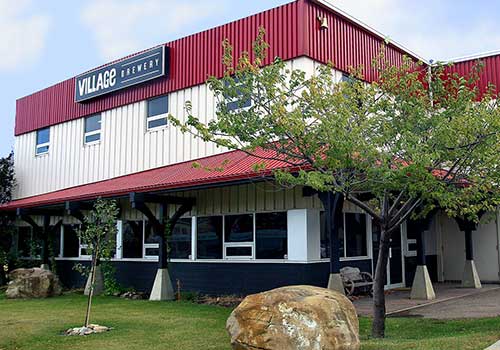 Village Brewery
Village Brewery prides itself on being involved in the community, with 10% of its bottom line going towards community, art, music, and wellness. Their mandate is to help support Calgary’s artists and craftspeople. Village beer that relies on hops and other ingredients grown by local gardeners and farmers.

Remember the Calgary Brewing & Malting Co. and its iconic Calgary Beer we mentioned earlier? Village Brewery recently got licensing approval to revive the 129-year-old brand in the form of a Craft Lager available in different historic-look cans.

Zero Issue
Zero Issue is a Calgary brewery owned by two brothers who love comic books (hence the name), Sci-Fi, and video games. Their beers have names pulled from Sci-Fi shows and movies, as well as comic books.

Tool Shed Brewing Company
Tool Shed Brewing Company resulted from a chance meeting between two men working on infrastructure and satellite projects in the middle east: Founders Graham Sherman and Jeff Orr met in Afghanistan while setting up military communications lines. The duo found they had similar interests and hobbies back in Canada and soon developed a fast friendship.

The brand’s slogan is, “hand crafted beer best served with a story,” and the story of the company’s inception is just one of the things that makes this brewery unique.

The Dandy Brewing Co.
The Dandy Brewing Company is a brewery that prides itself on following its path and focuses on small-batch brewing. According to the brewery, being a ‘Dandy’ “means falling hard into your internal fascinations, desires, and interests. Dandies ignore trends and styles and walk their own path. Every one of us has the chance to be a Dandy, most of us already are without knowing it, and we’re here to celebrate that.”

The Grizzly Paw Brewing Company
The Grizzly Paw Pub and Brewing Company has multiple locations in Canmore, with a BBQ, tasting room, store, and a pub, but their beers are also easily found without the drive at Co-op. It was established in 1996 and is known both for its beer and a popular line of sodas.

From the days of shipping barley seed across the country to make beer to crowd-sourcing hops for specialty beers, The sense of community in Calgary has always been an essential part of our beer story. Our local breweries hold one another in high regard and treat their businesses as a community, realizing that there’s always room for one more at the bar. Try out some of the local offerings.

You’re sure to find a new favourite and a beer you’ll fall in love with, made right in your town, and available cold at Co-op Wine Spirits Beer.