One Gin at a Time

Bryce Parsons is on a mission: to rid the world of awful gin memories.

“Gin has had a stigma,” laughs Parsons, Master Distiller at Last Best Brewing and Distilling. “People think gin tastes like it has that Pine Sol aspect and there are still a lot of people that remember their first time having too much gin. They've never touched it again.”

Erasing Gin’s Bad Rap
So convinced is Parsons of gin’s undeserving bad rap, he’s undertaken a quest: Last Best is making a new and different gin every week for a year. It’s called Gin Craze YYC (Follow the movement on Instagram @GinCrazeYYC). Parsons decided to throw himself into researching and developing gins with different subtleties, different essences and different herbal, floral or fruity notes to prove gin isn’t all the same stuff of those college memories.

“Gin has always fascinated me just simply because how creative you can get with it,” enthuses Parsons. “I do not think there is any other spirt category where a distiller can be as creative. You’re working with different botanicals or herbs and spices. I read a lot of cookbooks to come up with different spice blends.”

52 Weeks of Gin: GinCrazeYYC
Parsons has been distilling and bottling a new gin each week for Last Best Brewing and Distilling. Each one has a different flavour profile, a different name and is made in limited small batches. Winsome Ginsome will be the first release available at Co-op Wine Spirits Beer (they are usually only available at the pub at Last Best Brewery and Distillery). Parsons has been getting input from notable locals on each batch—this version included a collaboration with Calgary Co-op Wine Spirits Beer Spirits Category Manager, Heather Van Runt. 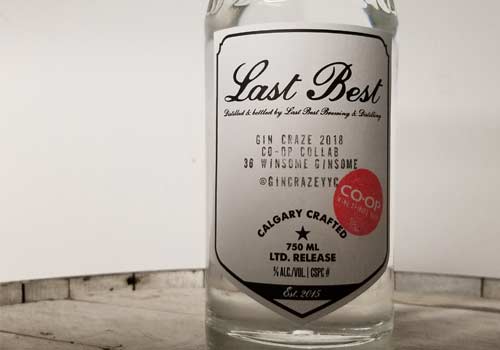 Last Best Brewing & Distilling Collaborates with Co-op Wine Spirits beer
“She came up with a bunch of ideas and one was based off her favourite gin, which is Bloom gin by Joanne Moore, from England. Joanne is one of the best gin makers in the world and Heather really likes her gin, which has flavours of chamomile, pomelo and honeysuckle,” explains Parsons.

“I wanted something that would be approachable to the average consumer and make a great gin & tonic,” says Van Runt of their collaboration. “When I mentioned Bloom to Bryce he was very excited because it was actually one of the gins he wrote his thesis on.”

Limited Edition Collaboration Gin: Winsome Ginsome
Winsome Ginsome will be available in Calgary Co-op Wine Spirits Beer beginning September 13th, but once it’s gone, it’s gone. If you miss out, you can perhaps still find some of the other 52 gins from Last Best’s GinCrazeYYC project, and Parsons hopes you’ll try several, since no two batches are alike. For that reason, there’s a high likelihood you’ll find something to love about gin, even if your first experiences have kept you from sampling it again.

Parsons’ 52 gins project is nearing completion; he’s made over 43 different gins so far, and Winsome Ginsome is the newest release.

“This collaboration between Last Best and Co-op was a wonderful experience,” raves Van Runt. “Bryce’s knowledge and sensory skills are out of this world, so to watch him create this gin was just awesome. I'm hoping customers will enjoy a fun, versatile gin, made by two local businesses, that suits most palettes and mixes well in cocktails. It's a limited, low yield production but who knows, maybe we'll create something again one day!”